> The Socialism of the Federal Reserve - Freedoms Phoenix 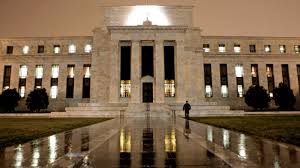 If the economy gets too "overheated," it slows the rate of increase.

In other words, the Fed is the government's monetary central planner. It plans the monetary affairs of hundreds of millions of people through monetary manipulation.

Central planning is a core principle of socialism. Central planning rejects the concept of economic liberty and free markets, which rely on the absence of government interference. Instead, it relies on a board of government officials who make economic decisions for hundreds of thousands or millions of people in a top-down, command-and-control manner.

As anyone from Venezuela, Cuba, and North Korea can attest, socialist central planning always produces crises. That's because the central planners can never attain the required knowledge to  plan a complex market, especially one involving hundreds of millions of participants engaged in countless economic transactions. This is especially true given that people's subjective valuations are constantly changing. There is no way that the planners can keep up with those changes in valuations.

That's what produces the crises. Friedrich Hayek, the Nobel Prize winning libertarian economist, called it the "fatal conceit" of the planner, the mindset that convinces the planner that he has the requisite knowledge to plan a complex, ever-changing market.