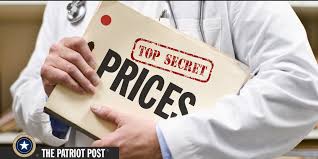 (Natural News) The Trump administration is currently in the process of finalizing a new price transparency rule that, once it comes into effect in January 2021, will force all hospitals to publish their service prices publicly for the benefit of consumers.

Currently, hospitals are allowed to charge whatever prices they want to for services, typically in secret, burdening patients with exorbitant bills after they've already received medical care. But Trump's new rule will ensure that customers know right upfront what the charges will be before they opt for oftentimes very expensive hospital services.

"For decades, hospitals, insurance companies, lobbyists, and special interests have hidden prices from consumers so they could drive up costs for you," the president stated in an announcement to the nation. "And you had no idea what was happening. You'd get bills that were unbelievable and you have no idea why."

"We're stopping American patients from just getting, pure and simple – two words, very simple words: ripped off," Trump is quoted as saying. "Because they've been ripped off for years."

Hospitals aren't the only bad players in the American medical paradigm, as insurance companies themselves are notorious for withholding price information from policyholders until after the medical bills come. This places an enormous burden on patients who oftentimes don't know what they're getting themselves into until it is already too late.