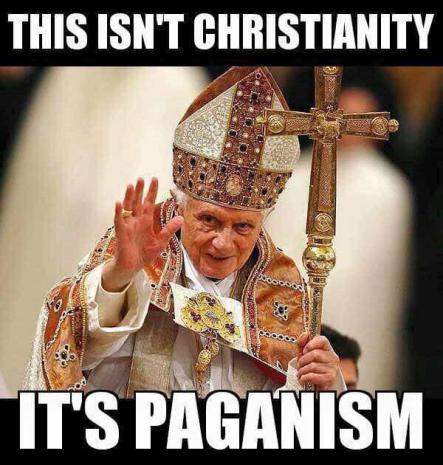 Someone Who Puts Himself in Place of Christ. and the Doctrines of This Church Are an Abomination to Our Holy Heavenly Father, Come out of Her My People! (Revelation 18:4).

"Beware of the fundamentalist groups: everyone has his own. In Argentina too there is a little fundamentalist corner," the pope told his hearers. "And let us try, with fraternity, to go forward. Fundamentalism is a scourge and all religions have some kind of fundamentalist first cousin there, which forms a group."

The pope took pains to show that it is not just Muslim extremists who practice violent fanaticism, citing historical instances of Christian fanaticism and religiously motivated violence, such as the Saint Bartholomew's Day massacre and a scene of forced conversion from the Chanson de Roland. Source

Pope Francis forgot to mention: The majority of people today, including Roman Catholics do not know about the true bloody history of the Papal Church of Rome. The true history of the Roman Catholic Church has been hidden away from the eyes of the masses, through the re-writing of the history books, so that they cannot see the truth about the antichrist church, otherwise known as Babylon, the Mother of Harlots. On this page, we will give you a glimpse into the history of Papal Rome, with a timeline of events that took place during the past 1000 years.

"Under the guise of Christianity, the Papal Church committed more enormities than ever disgraced the annals of paganism. Disregarding the maxims and the spirit of the Gospel, the papal Church, arming herself with the power of the sword, vexed the Church of God and wasted it for several centuries, a period most appropriately termed in history, the 'dark ages'. "The kings of the earth gave their power to the Beast." (Fox's Book of Martyrs, Ch. IV)

"Roman Catholicism was born in blood, has wallowed in blood, and has quenched its thirst in blood, and it is in letters of blood that its true history is written." (Baron DePonnat, 1940)

"I learned much from the Order of the Jesuits, said Hitler … Until now, there has never been anything more grandiose, on the earth, than the hierarchical organization of the Catholic Church. I transferred much of this organization into my own party." (Hermann Rauschning, former national-socialist chief of the government of Dantzig: 'Hitler m'a dit', (Ed. Co-operation, Paris 1939, pp.266, 267, 273 ss).

Before we get into the blood that the Roman Catholic Church has spilled throughout her history, just take a quick look at the following wicked crimes against CHILDREN that this church has committed and STILL continues to commit Source

500,000 children taken from families, forced into Catholic institutions and abused in Australia from 1930 to 1970 (link)

Pope John Paul II ignored the abuse of 2,000 boys in Austria over decades and covered up 'innumerable' cases of abuse (link)