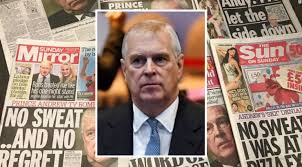 In a Wednesday statement, Andrew says that he has asked the Queen for permission to step back from public duties, and that he regrets his "ill-judged association with Jeffrey Epstein."

Meanwhile, now that Prince Andrew is "taking a step back from public duties for the foreseeable future" now that his "former association" with Epstein has become a "major disruption" to his family's work, it's becoming clear that the UK business community made clear it is no longer comfortable with the Duke of York.

With the entirety of the Royal Family's resources at his disposal, it's surprising that Prince Andrew wasn't able to come up with a better excuse after one of Jeffrey Epstein's accusers said she was forced to have sex with Andrew when she was still a minor. Delving deep into her account of the act, Andrew said that he couldn't have possibly slept with the young woman, because, during the period in question, he was unable to sweat because of a sports-related injury.