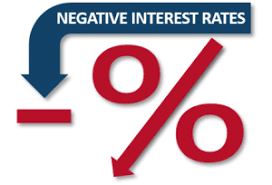 Since then, the glut of bonds with negative yields has gone down by about $5 trillion. And that's led to serious pain to anyone who bought them.

Interest rates throughout the world have been falling almost continuously since the 1980s. The first country to impose negative interest rates on a consistent basis was Sweden, which introduced a -0.25% rate on its "deposit interest rate" in 2009. The much larger European Central Bank (ECB), which sets monetary policy throughout the 19-country eurozone, followed suit in 2014 when it imposed a negative rate of -0.1%.

Negative interest rates were meant to be a temporary emergency measure to prop up moribund European economies. But they're also a great way for cash-strapped governments to pay the bills.

Switzerland was the first nation to issue long-term bonds with a negative yield. Its 10-year April 2025 bond was yielding -1.1% in mid-August. It now yields -0.4%. If you bought the bonds in August and hold them to maturity, your annual yield would be -1.1%. You could always sell them now, but if you did, you'd experience a substantial capital loss.