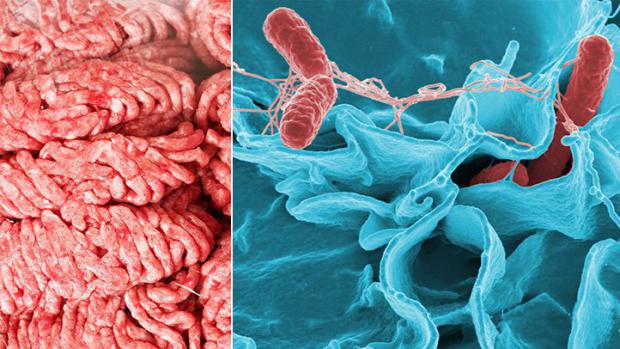 Surprise! There is another foodborne illness outbreak making the rounds. Some of the details surrounding this one are particularly disturbing.

This time, the offending pathogen is a nasty strain of Salmonella.

Officials say another person is among the victims of a seven-state Salmonella Dublin outbreak that is linked to ground beef. One company has initiated a recall, but federal officials say other unnamed companies also have had positive test results for the pathogen.

In an outbreak update, the Centers for Disease Control and Prevention reported that 11 people have been confirmed with the outbreak strain of Salmonella Dublin. Eight have been admitted to hospitals and one has died. (source)

A list of the states and the number of cases in each can be found on the CDC's Map of Reported Cases page.

Cases began emerging in August 2019, ill people range in age from 39 to 74 years, and seventy-three percent are male. One death was reported in California.

The CDC reports that

In five (45%) ill people, Salmonella was found in samples of blood, which indicates their illnesses may have been more severe. Salmonella Dublin is known to commonly cause more severe illnesses than other Salmonella strains, particularly in older people.

Illnesses might not yet be reported due to the time it takes between when someone becomes ill and when the illness is reported. This takes an average of 2 to 4 weeks. Please see the Timeline for Reporting Cases of Salmonella Infection for more details. (source)

One company has recalled contaminated products related to this outbreak.

The USDA Food Safety and Inspection Service (FSIS) issued a public notice about the outbreak and one related recall on November 15. Here is an excerpt from that notice:

The ground beef items were produced on July 23, 2019. The following products are subject to recall: [View Labels (PDF only)]

The products subject to recall bear establishment number "EST. 6063A" printed on the retail labels next to the lot number and inside the USDA mark of inspection on the case labels. These items were shipped to retail locations in California. (source)

If you have any of these products in your freezer, the CDC and FSIS urge you to throw them out or return them to the place of purchase.

The brand names of other contaminated products have not been revealed.

Keep in mind that other brands – as of now, unnamed – also have tested positive for this strain of Salmonella, but for some unknown reason, the public is not being told WHICH brands are impacted.

One company has initiated a recall, but federal officials say other unnamed companies also have had positive test results for the pathogen. (source)