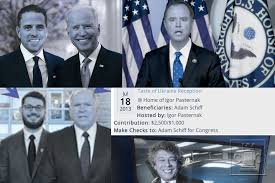 The CEO of Burisma in Ukraine was arrested. He started talking. As it turns out, Biden's kid, Hunter, was not getting paid $50,000 a month, his base salary was closer to $200,000 a month, and now that someone is talking, Hunter received several payments "in the millions" totaling $16.5 million OUTSIDE of his regular pay.

Here is a quote from the original source at CD media

"In our extensive discussions with Onyshchenko, CD Media can report that he confirmed Hunter Biden took 'off the books' payments totally millions from Burisma.

"There were 'official' and 'unofficial' payments to the Biden family, " Onyshchenko stated.

Onyshchenko also confirmed that former FBI agent Karen Greenaway, who oversaw the Obama administration's anti-corruption efforts in Eastern Europe, directed the coverup of the Biden scandal at the time, in concert with the U.S. embassy in Kyiv, and other Deep State American government assets 'in-country'.