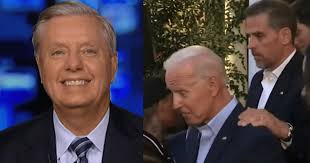 It is my understanding that on February 4, 2016, the Ukrainian Prosecutor General's office, under the direction of Prosecutor General Viktor Shokin, announced the seizure of property from Ukrainian natural gas company Burisma Holdings' founder, Mykola Zlochevksy. The seizure occurred pursuant to a raid on Mr. Zlochevsky's home on February 2, 2016.

It is also my understanding that on February 4, 2016, Hunter Biden began "following" then-Deputy Secretary of State Tony Blinken, a longtime advisor to Vice President Joe Biden, on Twitter, indicating that the two may have initiated conversations regarding Prosecutor General Shokin's investigation into Burisma. At that time, Hunter Biden was serving as a board member or Burisma.

In addition, according to records obtained by media sources, on February 11, 18, and 19 of 2016, Vice President Biden held a series of phone calls with Ukrainian President Petro Poroshenko regarding previous demands to dismiss Prosecutor General Shokin for alleged corruption. Another phone call between the two took place on March 22, 2016, just seven days before Prosecutor General Shokin was removed from office on March 29, 2016.

To assist in answering questions regarding allegations that Vice President Biden played a role in the termination of Prosecutor General Shokin in an effort to end the investigation of the company employing his son, I request the following:

All documents and communications, including call transcripts or summaries, related to the Vice President's phone calls with President Poroshenko on February 11, 18, and 19 and March 22 of 2016, especially with respect to whether Vice President Biden mentioned the Prosecutor General's investigation into Burisma.

All documents and communications between the Vice President and his office and President Poroshenko and his office after the raid on Mr. Zlochevsky's home on February 2, 2016, until the dismissal of the Prosecutor General on March 29, 2016.

All documents and communications related to a meeting between Devon Archer, a business partner of Hunter Biden, and Secretary of State John Kerry on March 2, 2016.

Thank you for your prompt attention to my request.

We look forward to hearing the Democrats decrying this 'witch-hunt'.

FBI publishes series of photos from inside people's homes on Twitter and asks for...