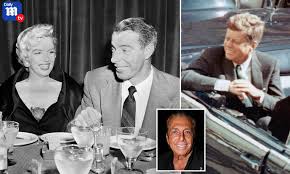 In an exclusive interview with DailyMailTV, Russo, who played Carlo Rizzi in The Godfather, says the blonde bombshell could still be alive today if her ex-husband, baseball legend Joe DiMaggio, had come pick her up from a Nevada resort when she called just three days before her death.

The 75-year-old, who claims he himself also had an affair with Monroe, says she made a phone call to DiMaggio to come 'get me out of here'.

'Joe DiMaggio don't come. She's dead,' he says. 'Marilyn Monroe might still be alive today had he come to pick her up that night.'

He also claims that the notorious assassin Lee Harvey Oswald was not the one who killed JFK, and claims he knows who did.

In August 1962, Chicago crime boss Sam Giancana and his mobsters flocked to Cal Neva Lodge & Casino near Lake Tahoe, Nevada, where Monroe was high on Xanax with singer Frank Sinatra.