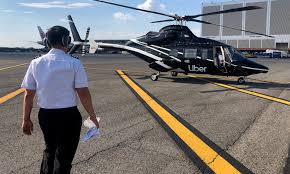 The 8-minute trip cost just $108.98 -- a third lower than the $163.11 charge for an Uber Black ride, and just a tad higher than the basic UberX at $100.35, according to prices offered by Uber Technologies Inc. earlier this month seen by Bloomberg. Like other Uber products, the pricing of helicopter rides can vary by location, time of day and other factors, but the fire sale was a standout given the ride-hailing app's new focus on slashing rider discounts with the quest to be profitable by the end of 2021.

Helicopter rides typically cost between $200 and $225, according to the company. And the discount was a temporary offer for "a small, random set of riders," Matt Wing, an Uber spokesman, said in response to queries.

Wing declined to say how many helicopter rides Uber has completed since it introduced the service in July. It's gathering data from the New York service, which currently runs Monday through Friday during afternoon rush hour, before deciding whether to expand.