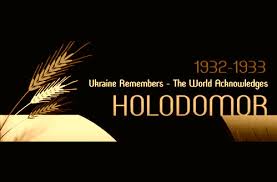 As the holidays approach us, we are reminded to give thanks for the things in our lives we are most thankful for. For me, the fourth Saturday in November is dedicated to the remembrance of the millions of human beings who were murdered in the mass genocide by starvation: Holodomor, translated to mean "killing by starvation." Between 1932–1933 approximately 7 million farming families were exterminated by deliberate, centrally-planned, forced famine in Ukraine and another 3 million just outside of Ukraine, totaling 10 million unnecessary deaths of innocent, hard-working people. There was no drought, no war, no reason for these deaths to occur; especially in one of the world's richest and fertile farmlands of the Black Earth Region.

Last year when I made a pilgrimage to visit my roots and birthplace in Vinnytsia, Ukraine, the one place I visited that affected me more than any other place was the Holodomor Museum in Kyiv, Ukraine, which opened in 2008. It's hard to imagine that only 87 years ago, the tyrannic authoritarian Soviet leader, Stalin, robbed Ukrainians of all their grain and confiscated all their valuables as part of his conspiracy and socialist plan for collectivization.

LEADING VACCINE RESEARCHER TELLS YOU WHAT'S IN THE COVID VACCINE