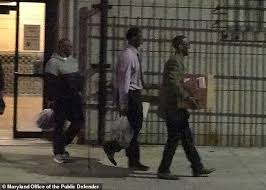 Alfred Chestnut, Ransom Watkins and Andrew Stewart are all in their early 50s

The real shooter was named by witnesses as Michael Willis; he is now dead

But detectives and prosecutors pushed for the three boys, who had been seen in the hallways of the school earlier that day, to be jailed

They were 17 and 16 when they were put behind bars

Since 2015, the unit has helped exonerate nine wrongfully convicted people