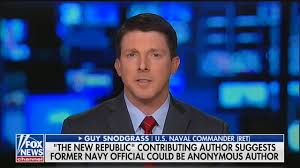 Snodgrass posted the article guessing he was the writer to his Twitter with the caption: 'The swirl continues...'

He did not deny writing the op-ed and book

'No comment at this time,' he responded when pressed by a Mother Jones reporter on whether he's the anonymous author

Snodgrass wrote 'Holding the Line: Inside Trump's Pentagon with Secretary Mattis', which he published along with his name on it at the end of October