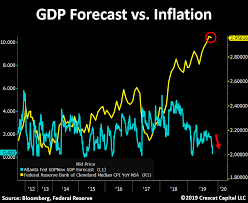 A passive investing and ETF craze that has led to historic lofty US equity valuations across a composite of fundamental measures tracked by Crescat;

Impossibly valued currency and credit markets in China at an extreme for any large country relative to the size of its economy;

China's banking assets are valued at USD 41 trillion, including substantial hidden non-performing loans in our analysis, a major mismatch compared to its much smaller and stumbling 13.6 trillion GDP economy;

Record $17 trillion of negative yielding sovereign debt which may have just peaked in August 2019;

Record indebtedness of US public and private corporations combined relative to GDP;

Crowded "risk parity" positioning among large hedge funds and institutions who are long stocks paired with leveraged long bonds, a strategy that worked exceptionally well in a forty-year backtest as well as the last ten years that it has become popular, but it's a strategy that would likely get decimated in a rising inflation paradigm;

Fashionable short volatility strategies which are yield enhancement strategies for an income starved world, but the extra yield is earned in exchange for accepting asymmetric downside risk;

High valuations and crowding into sectors traditionally viewed as defensive (including utilities, REITs, and consumer staples) with utilities being the most fundamentally questionable among them in our view; and