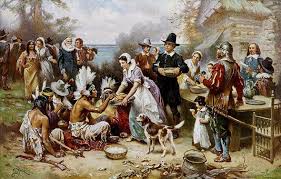 ext year at this time, Americans will mark the 400th anniversary of the landing of the Mayflower in 1620 and the subsequent founding of the Plymouth colony by English Puritans we know as the Pilgrims. They, of course, became the mothers and fathers of the first Thanksgiving.

The first few years of the settlement were fraught with hardship and hunger. Four centuries later, they also provide us with one of history's most decisive verdicts on the critical importance of private property. We should never forget that the Plymouth colony was headed straight for oblivion under a communal, socialist plan but saved itself when it embraced something very different.

In the diary of the colony's first governor, William Bradford, we can read about the settlers' initial arrangement: Land was held in common. Crops were brought to a common storehouse and distributed equally. For two years, every person had to work for everybody else (the community), not for themselves as individuals or families. Did they live happily ever after in this socialist utopia?

MOVE Bombing: The Story of How Philadelphia Became "The City That Bombed Itself"