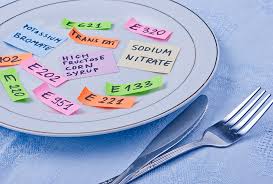 (Natural News) Experts warn parents to be careful when buying food and drinks for their kids. Researchers at the University of Glasgow in the U.K. found that many children's food and drinks like fruit-based snacks, juices, yogurts, cereals and ready-to-eat meals marketed as "healthy" in the U.K. are not actually as healthy as claimed.

The researchers found that of the 332 products investigated from supermarkets, 41 percent were less healthy than they were marketed to be. These products included juices, cereal bars, cereals, fruit snacks, and yogurts. Aside from making health claims, these products used cartoons, toys, and other such promotions to attract young consumers.

They noted that parents trying to feed their children healthy foods were being deceived by food labels claiming the products are nutritious, but which were actually packed with sugar or salt. Such products – most of which were fruit-based drinks and snacks – had labels that say, "no added sugars."

Many products also made claims about containing "one of five a day" fruits and vegetables, but most did not contain the recommended portion size of 80 g. The researchers warned that such health claims have created a "health halo," misleading parents from the fact that many such snacks were full of sugar. They also warned that the heavy use of cartoons as a marketing ploy have greatly contributed to the childhood obesity crisis. (Related: 7 Sneaky Food Marketing Strategies Designed to Trick You.)

The researchers found that cereal bars contained the highest content of energy and saturated fat, while cereals had the most salt. Results from nutritional profiling tests also showed that many yogurts were less healthy than claimed, containing high saturated fat and low fiber.

Additionally, fruit snacks were found to have the highest sugar content, averaging 48 g per 100 g. Most fruit snacks also made the five-a-day claim, which could be misleading or confusing for parents. Forty-two percent of the products tested said they had at least one portion of five-a-day of fruits or vegetables – however, 3/4 of those did not really contain what they claimed. There is no exact portion size recommended for children, but 62.3 percent of products which made the claim did not even contain 40 g of fruits or vegetables.

Additionally, almost a quarter of the products – mostly fruit-based drinks and snacks – claimed no added sugars in them, but half had concentrated juice or fruit puree as added ingredients. This could mislead consumers who might not realize that they were still loaded with natural sugars that could also contribute to weight gain.

"Prepacked foods targeted to children can be consumed as part of a 'healthy' diet, yet their health and nutrition claims remain questionable," said the researchers.

The fight against childhood obesity

The researchers stressed the need for stricter regulations for food labeling, marketing techniques, and product content to lessen the risk of obesity, especially now that childhood obesity has become endemic. The consumption of less nutritious foods may affect children's health in the long run.

Lab-Grown Cellular Meat Could Be In Supermarkets Within Five Years