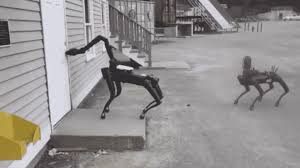 Cops have long had dogs, and robots, to help them do their jobs. And now, they have a robot dog.

Massachusetts State Police is the first law enforcement agency in the country to use Boston Dynamics' dog-like robot, called Spot. While the use of robotic technology is not new for state police, the temporary acquisition of Spot — a customizable robot some have called "terrifying" — is raising questions from civil rights advocates about how much oversight there should be over police robotics programs.

The state's bomb squad had Spot on loan from the Waltham-based Boston Dynamics for three months starting in August until November, according to records obtained by the American Civil Liberties Union of Massachusetts and reviewed by WBUR.

The documents do not reveal a lot of details on the robot dog's exact use, but a state police spokesman said Spot, like the department's other robots, was used as a "mobile remote observation device" to provide troopers with images of suspicious devices or potentially hazardous locations, like where an armed suspect might be hiding.

The Robots Are Coming, And They Are Going To Take Over Millions Of Jobs