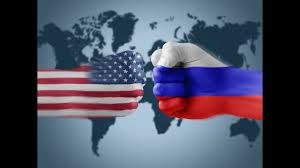 That's what the U.S. post-Cold War invigoration of NATO was all about, especially its absorption of former Warsaw Pact countries. It's also what NATO's attempt to absorb Ukraine, oust the Soviets from their long-established base in Crimea, and install U.S. missiles on Russia's borders were all about.

It's also what all the anti-Russia brouhaha has been all about. The aim has always been to reconvert Russia into an official enemy, adversary, opponent, and rival of the United States. What better way to keep the American people agitated and fearful? What better way to guarantee ever-increasing budgets for the Pentagon, the CIA, and the NSA, the three principal components of America's deep state?

Oh sure, the "war on terrorism" has succeeded mightily in making Americans afraid of "the terrorists" and, to a certain extent, the "Muslims." But many Americans are figuring out that anti-American terrorism is rooted in U.S. interventionism, which the Pentagon and the CIA introduced into the Middle East soon after the Soviet Union called an end to the Cold War racket. As soon as U.S. military and paramilitary forces are withdrawn from the Middle East and Afghanistan, the national-security establishment knows that its "war on terrorism" racket will disintegrate.