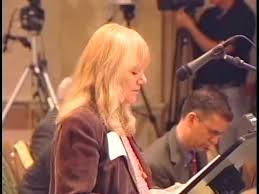 Ann Blake-Tracy, head of the International Coalition for Drug Awareness, author of Prozac: Panacea or Pandora? & Our Serotonin Nightmare. For 15 years I have testified in court cases involving antidepressants. The last 17 years of my life have been devoted to researching, writing, and lecturing about these drugs.

Two of my nieces in their early 20′s, a decade apart, attempted suicide on antidepressants, the first on Prozac, the second just a month ago on Wellbutrin.

Due to time constraints I refer you to my September, 2004 testimony on the damaging effects of inhibiting serotonin metabolism -- the very mode of action of antidepressants. Impairing serotonin metabolism results in a multitude of symptoms including suicide, violent crime, mania and psychosis. Suicidal ideation is, without question, associated with these drugs.

Rosie Meysenburg, Sara Bostock and I have collected and posted 1200 [now 3000] news articles documenting many exaggerated acts of violence against self or others at www.drugawareness.org with a direct link to http://www.ssristories.net

Beyond suicidal ideation we have mania/bipolar increasing dramatically. Antidepressants have always been known to trigger both.

According to the Pharmaceutical Business Review in the last 11 years alone, the number of people in the U.S. with "bipolar" disorder has increased by 4.8 million. [a 4000% increase]

Dr. Malcolm Bowers of Yale, found in the late 90′s over 200,000 people yearly are hospitalized with antidepressant-induced manic psychosis. They also point out that most go unrecognized as medication-induced, remain un hospitalized, and a threat to themselves and others.

What types of threats from manias?