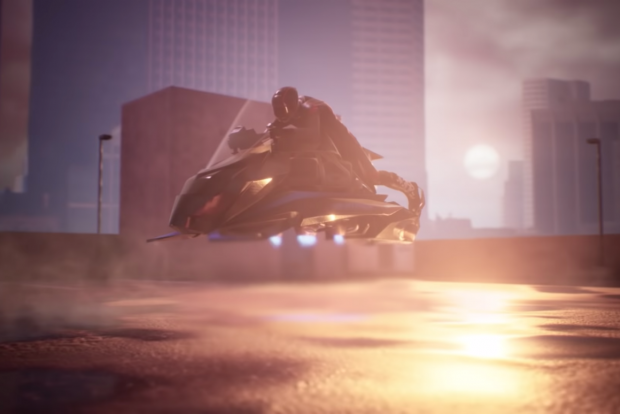 It's a very strange design, with the entire thing balanced on a central column of thrust from five turbine engines, all bunched together and gimbaled for balance and control. Last time we spoke, Mayman described the computer-controlled process of flying the thing as similar to balancing a pencil on the tip of your finger – and yet he's confident it'll work.

Having just been through the renowned YCombinator startup boot camp, Mayman has managed to raise the capital to take the Speeder concept through to a full-size prototype – and in the process, he's also starting to envision a fully-enclosed version that would be capable of upwards of 400 mph (644 km/h).

Mayman is always a wonderful interview – not to mention the subject of a terrific documentary film. His life as a personal aviation pioneer is absolute madness – we caught up this time just after he'd finished a dual jetpack performance in front of two million people at Huntington Beach, California, in which he and Jetpack Aviation's other lead pilot, Boris Jarry, had found themselves drenched with seawater from a firefighting display as they rocketed up and down the coastline. That's almost a regular day for Mayman by now, but he's wonderfully technically minded, and always open for a frank discussion, which is why I like to reproduce our chats at length. Hopefully it's as fun to read as it is to chat.

This time, Mayman discusses who's funding the Speeder flying motorcycle, what they're planning to do with it, the potential of a super-high-speed version, why he's sticking with jet turbines rather than looking at electric propulsion for now, where flying motorcycles might fit into the future VTOL transport mix, and his plans to fly both the Speeder and the jetpacks into the backs of moving planes one of these days ... what a life, eh!

What follows is an edited transcription.

Loz: So, who's ponying up the money to help you build these Speeders?

David Mayman: So at the back end of YCombinator, the accelerator program, we found some angels that got involved. They put up maybe 3 or 400,000. Then we just finished a seed round a couple of weeks ago for US$2,000,000, and that was led by Tim Draper at Draper Associates up in Silicon Valley. Pretty well known as a great moon shot investor – was one of the first investors in Tesla and SpaceX. He doesn't mind taking a hardware bet.