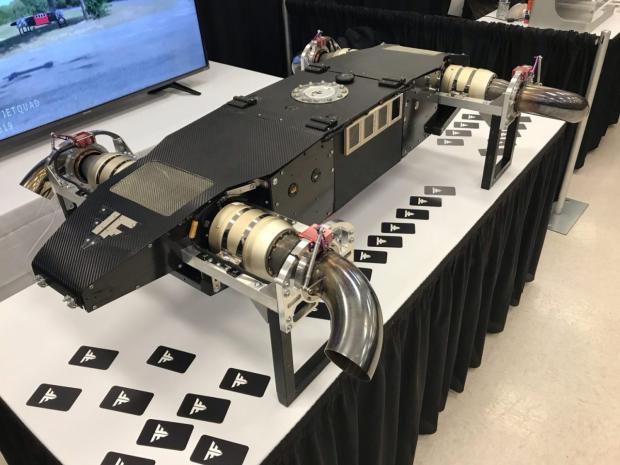 While propeller planes certainly do have their place, sometimes the extra speed and thrust of a jet engine is what's really needed. Dallas, Texas-based FusionFlight has applied that sort of thinking to quadcopter-style drones, resulting in the AB5 JetQuad.

According to the company, the AB5 is "the world's smallest and most powerful jet-powered drone with vertical take-off and landing [VTOL] capabilities."

Instead of the usual four electric motors and propellers, the current prototype has four diesel-powered microturbine jet engines which produce a combined 200 horsepower (149 kW) at full throttle. Thanks to a proprietary vectoring system known as the H-Configuration, the thrust from these engines can be directed either to move the drone vertically when taking off and landing, or horizontally while in flight.

The production version of the aircraft will reportedly have a top speed of over 300 mph (483 km/h), with one fill of its 5-gallon (19-l) fuel tank being good for 30 minutes of hovering or 15 minutes of cruising. Down the road, the addition of components such as afterburners could boost its speed considerably.

It will carry a maximum payload of 40 lb (18 kg), with cargo being either attached to the drone itself or dangled on a line underneath – the company states that the cargo won't be blasted by the engines in the latter configuration, as the thrust is never vectored straight below the AB5. The drone itself weighs a claimed 50 lb (23 kg), with a full tank of fuel adding another 40 lb.