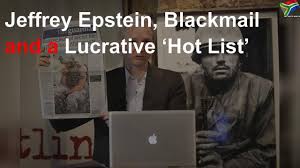 Towering, barrel-chested and wild-bearded, he was a prodigious drinker and often wore flip-flops. He went by a pseudonym, Patrick Kessler — a necessity, he said, given the shadowy, dangerous world that he inhabited.

He told the lawyers he had something incendiary: a vast archive of Mr. Epstein's data, stored on encrypted servers overseas. He said he had years of the financier's communications and financial records — as well as thousands of hours of footage from hidden cameras in the bedrooms of Mr. Epstein's properties. The videos, Kessler said, captured some of the world's richest, most powerful men in compromising sexual situations — even in the act of rape.

Kessler said he wanted to expose these men. If he was telling the truth, his trove could answer one of the Epstein saga's most baffling questions: How did a college dropout and high school math teacher amass a purported nine-figure fortune? One persistent but unproven theory was that he ran a sprawling blackmail operation. That would explain why moguls, scientists, political leaders and a royal stayed loyal to him, in some cases even after he first went to jail.

The Corporate Debt Bubble Is A Train Wreck In Slow Motion