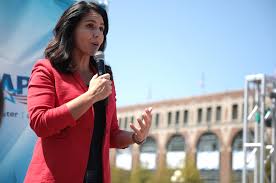 The Democratic establishment is increasingly irritated.

Representative Tulsi Gabbard, long-shot candidate for president, is attacking her own party for promoting the "deeply destructive" policy of "regime change wars." Gabbard has even called Hillary Clinton "the queen of warmongers, embodiment of corruption, and personification of the rot that has sickened the Democratic Party."

"It's a little hard to figure out what itch she's trying to scratch in the Democratic Party right now."

"where is Tulsi distinguishing herself when it really matters?"

Gabbard recognizes that George W. Bush is not the only simpleton warmonger who's plunged the nation into conflict, causing enormous harm. In the last Democratic presidential debate, she explained that the issue was "personal to me" since she'd "served in a medical unit where every single day, I saw the terribly high, human costs of war." Compare her perspective to that of the ivory tower warriors of Right and Left, ever ready to send others off to fight not so grand crusades.

Was WWII a Battle Between Capitalism and Socialism?

Doomsday Clock Moves Closer Than Ever to Midnight

No Good Men Among the Living: America, the Taliban, and the War through Afghan Eyes