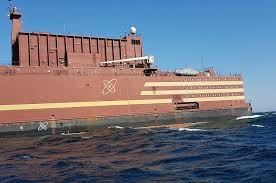 Now the Russian state nuclear company, Rosatom, has completed the first commercial floating nuclear plant and has successfully towed it to its ultimate location in the Russian Far East where access to power is difficult.

It could transform the energy demands of much of the developing world, in addition to Russia. An added plus is that nuclear plants emit zero carbon emissions so that political opposition based on CO2 does not apply.

The floating power plant, named Akademik Lomonosov, houses two 35-megawatt reactors, based on the design of the nuclear plants aboard the successful fleet of Russian nuclear-powered icebreakers and capable of providing 70 MW electric power to city of 100,000.By comparison a typical on-land nuclear station in the USA or Europe is 1,000 MW in size making them suitable only for densely populated industrialized areas.

The smaller reactors are far cheaper to build once they go into multiple-unit production and are far more flexible for locations in developing regions of Asia or Africa where lack of reliable electricity is a major constraint to economic development. The construction and installation cost for the Lomonosov is reportedly $480 million, or about $6.90 per watt, slightly more than an average conventional plant.