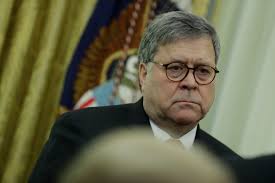 The Justice Department's inspector general, Michael Horo­witz, is due to release his long-awaited findings in a week, but behind the scenes at the Justice Department, disagreement has surfaced about one of Horowitz's central conclusions on the origins of the Russia investigation. The discord could be the prelude to a major fissure within federal law enforcement on the controversial question of investigating a presidential campaign.

Barr has not been swayed by Horowitz's rationale for concluding that the FBI had sufficient basis to open an investigation on July 31, 2016, these people said.

Barr's public defenses of President Trump, including his assertion that intelligence agents spied on the Trump campaign, have led Democrats to accuse him of acting like the president's personal attorney and eroding the independence of the Justice Department. But Trump and his Republican allies have cheered Barr's skepticism of the Russia investigation.

It's not yet clear how Barr plans to make his objection to Horowitz's conclusion known. The inspector general report, currently in draft form, is being finalized after input from various witnesses and offices that were scrutinized by the inspector general. Barr or a senior Justice Department official could submit a formal letter as part of that process, which would then be included in the final report. It is standard practice for every inspector general report to include a written response from the department. Barr could forgo a written rebuttal on that specific point and just publicly state his concerns.