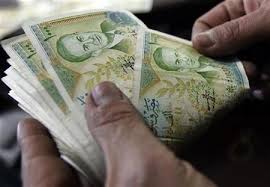 According to Al-Watan, the Syrian Pound improved by more than 15 percent on Wednesday, reaching 850 SYP for every $1 (USD).

Local markets yesterday witnessed a severe recession, so that a large number of economic and commercial activities and shops closed until the direction of the exchange rate was clear.

The pound's fall has accelerated since mid-October, when Lebanon's economic crisis worsened amid a wave of anti-government protests. — Reuters