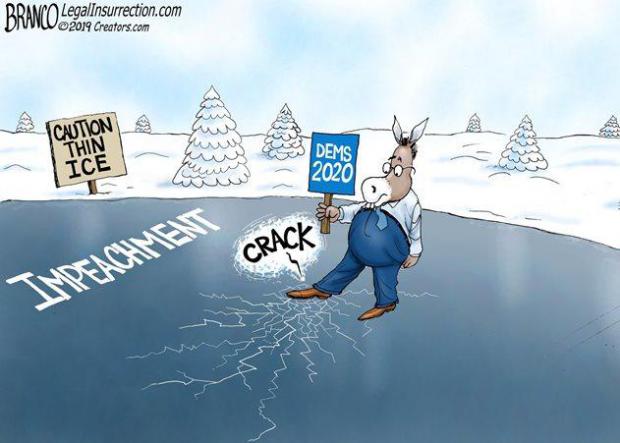 I knew that going into the first hearing of the House Judiciary Committee on the impeachment of Donald Trump. After all, Alexander Hamilton that impeachment would often occur in an environment of "agitated passions." Yet I remained a tad naive in hoping that an academic discussion on the history and standards of it might offer a brief hiatus from hateful rhetoric on both sides.

In my testimony Wednesday, I lamented that, as in the impeachment of President Clinton from 1998 to 1999, there is an intense "rancor and rage" and "stifling intolerance" that blinds people to opposing views. My call for greater civility and dialogue may have been the least successful argument I made to the committee. Before I finished my testimony, my home and office were inundated with threatening messages and demands that I be fired from George Washington University for arguing that, while a case for impeachment can be made, it has not been made on this record.

Some of the most heated attacks came from Democratic members of the House Judiciary Committee. Representative Eric Swalwell of California attacked me for defending my client, Judge Thomas Porteous, in the last impeachment trial and noted that I lost that case. Swalwell pointed out that I said Porteous had not been charged with a crime for any conduct, which is an obviously material point for any impeachment defense.

Not all Democrats supported such scorched earth tactics. One senior Democrat on the committee apologized to me afterward for the attack from Swalwell. Yet many others relished seeing my representations of an accused federal judge being used to attack my credibility, even as they claimed to defend the rule of law. Indeed, Rachel Maddow lambasted me on MSNBC for defending the judge, who was accused but never charged with taking bribes, and referring to him as a "moocher" for the allegations that he accepted free lunches and whether such gratuities, which were not barred at the time, would constitute impeachable offenses.

Washington Post columnist Dana Milbank expanded on this theme of attacking my past argument. Despite 52 pages of my detailed testimony, more than twice the length of all the other witnesses combined, on the cases and history of impeachment, he described it as being "primarily emotional and political." Milbank claimed that I contradicted my testimony in a 2013 hearing when I presented "exactly the opposite case against President Obama" by saying "it would be 'very dangerous' to the balance of powers not to hold Obama accountable for assuming powers 'very similar' to the 'right of the king' to essentially stand above the law."

But I was not speaking of an impeachment then. It was a discussion of the separation of powers and the need for Congress to fight against unilateral executive actions, the very issue that Democrats raise against Trump. I did not call for Obama to be impeached, but that is par for the course in the echo chamber today in which the facts must conform to the frenzy. It was unsettling to see the embrace of a false narrative that I "contradicted" my testimony from the Clinton impeachment, a false narrative fueled by the concluding remarks of Committee Chairman Jerry Nadler of New York quoting from my 1998 testimony. Notably, neither Swalwell nor Nadler allowed me to respond to those or any other attacks. It was then picked up eagerly by others, despite being a demonstrably false narrative.

In my testimony Wednesday, I stated repeatedly, as I did 21 years ago, that a president can be impeached for noncriminal acts, including abuse of power. I made that point no fewer that a dozen times in analyzing the case against Trump and, from the first day of the Ukraine scandal, I have made that argument both on air and in print. Yet various news publications still excitedly reported that, in an opinion piece I wrote for the Washington Post five years ago, I said, "While there is a high bar for what constitutes grounds for impeachment, an offense does not have to be indictable," and it could include "serious misconduct or a violation of public trust."

That is precisely what I have said regarding Trump. You just need to prove abuse of power. My objection is not that you cannot impeach Trump for abuse of power but that this record is comparably thin compared to past impeachments and contains conflicts, contradictions, and gaps including various witnesses not subpoenaed. I suggested that Democrats drop the arbitrary schedule of a vote by the end of December and complete their case and this record before voting on any articles of impeachment. In my view, they have not proven abuse of power in this incomplete record.