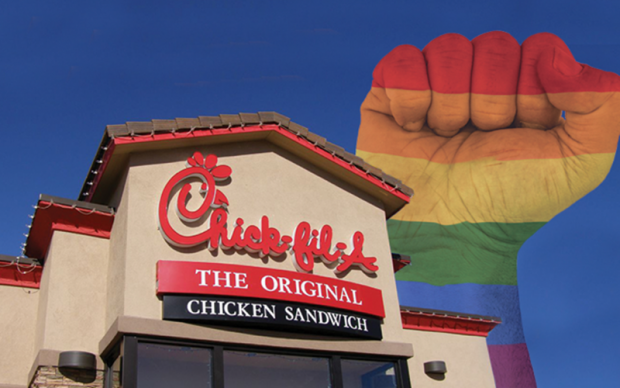 While far-left activists do seek social change, their main motivation is control. Could we expect anything less from the same kind of people who want to shape every conceivable part of society in their own image?

After fending off their own left-wing mob for over a half-decade resulting from their charitable donations, Chick-Fil-A finally caved. Now it's evident that they never should've. Management at Chick-fil-A must've convinced themselves that their critics had a legitimate grievance that could be remedied.

Unfortunately, when you transgress against the left, the resulting scarlet letter is permanent. As Christian Headlines reported:

The planned opening of a Chick-fil-A in Windsor, Ontario, is drawing protests from LGBT activists, despite the company's change in giving strategy.

About 20 people protested outside the Windsor city hall Monday, holding signs reading "Chick-fil-A hates LGBTQ+ people," and "Chick-fil-A is a homophobe," according to the Windsor Star. "If and when they do open, we're going to be there protesting," protest organizer Cole Fortier told the newspaper. "Their grand opening, job fairs, whatever they have, we're going to be there."

When confronted with the reality that Chick-fil-A ceased donations to the charities unfairly branded homophobic, that made zero difference.

The protesters in Windsor, Canada said the Foundation's change in giving strategy does not matter. "Don't bring hatred into the country," protester Hedy Halpern told the Star. "They are fear-mongering, I think that they are pushing an agenda that is hateful and is something that should not be welcomed in Canada. I really don't want to see them in this country."