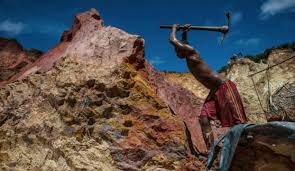 "There is a major human toll if we do not get control of this problem," said Rubio, citing a cornucopia of evils unleashed by illegal mining including human trafficking, corruption, disease, mercury poisoning, drug smuggling, widespread deforestation in the Amazon basin and the enrichment of powerful criminal groups and rogue governments like Nicolás Maduro's regime in Venezuela.

But American consumers are scooping up gold with little awareness of where it comes from or who gets hurt. The metal is used not only by the jewelry industry but also in electronics such as smartphones and tablets. Rubio said 58 percent of imported U.S. gold comes from Latin America. Miami International Airport, the closest U.S. port to Latin America, has long been the nation's leading gateway of gold.

"Unfortunately, my home community ... has become a major entry point for this activity," Rubio said. "It's refined, it's made into jewelry or placed into our electronics and then it's sold to U.S. consumers — much of it, if not all of it, untraceable."