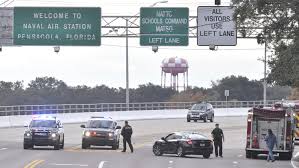 UPDATE 11:10 a.m. A spokesman for NAS Pensacola confirmed that the base is still on lockdown and said the number of injured is expected to rise as the day goes on.

Four people, including the shooter, are still confirmed deceased.

UPDATE 10:45 a.m.: Corry Station, a naval training installation a few miles northwest of NAS Pensacola, has been placed on lockdown as a precaution. Personnel are sheltering in place until the lockdown is lifted.

UPDATE 9:45 a.m.: Sheriff David Morgan has confirmed that four people are dead following a shooting at NAS Pensacola Friday morning, including the shooter.

Total injured, including deceased, are 11, according to Morgan. Seven patients are currently being treated at Baptist Hospital.