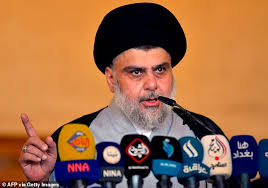 An armed drone fired a rocket at the home of an influential Iraqi cleric just hours after at least 25 protesters were killed when gunmen opened fire in Baghdad.

The drone attack, which caused little damage and left no casualties, followed a deadly attack by armed men near Baghdad's main protest site on Friday.

Nearly 130 were wounded by gunfire and stabbings targeting anti-government protesters at the Sinak bridge near Tahrir Square, sources said.

Al-Sadr, who has supported the protests, was in Iran at the time of the drone attack on his home in the southern holy city of Najaf, a source in his office said.