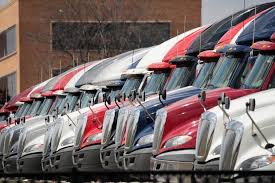 Class 8 orders against collapsed in November, culminating a dismal year that some thought had seen a reprive with October's improved bookings. But new data from FreightWaves shows that the collapse has continued its trend, indicating that the sluggish economy is to blame for lackluster replacement demand.

Orders totaled 17,300 units for the month, which marks the slowest November since 2015 and a 39% collapse from November 2018. The slowdown in orders is prompting layoffs of hundreds of production workers by companies like Daimler Trucks North America, Volvo Trucks North America, Paccar Inc. and Navistar International Corp.

Other names in the Class 8 supply chain are also dealing with the negative effects. For instance, engine manufacturer Cummins Inc. is "laying off 2,000 white-collar employees globally in the first quarter of 2020".

Meanwhile, November used to be a month when fleets would be busy placing orders for the upcoming year. After October's slight tick up in orders, many analysts thought November could follow suit. That didn't happen, and sequentially November's order book was down 21% from October.