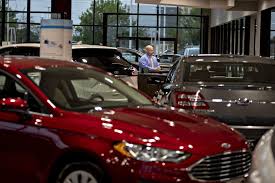 The average amount of a new-vehicle loan rose by 5% to $32,480 from a year earlier, according to information services firm Experian PLC. The average used-vehicle loan increased by 3% to $20,466.

Car buyers are paying up for high-tech features such as voice-activated entertainment systems and semi-autonomous driver-assist technology that steers wandering cars back into their lane and automatically brakes to avoid read-end collisions.

"Not only are consumers preferring SUVs which are typically more expensive than their sedan counterparts, but they're also choosing not to skimp on in-vehicle features and content -- a positive indicator of consumer confidence in the economy," said Oliver Strauss, chief economist at ALG, a subsidiary of TrueCar.

U.S. auto debt has continued to expand, ticking up to $1.32 trillion in the third quarter -- an increase of $50 billion from a year earlier, according to the latest data from the New York Fed. The percentage of car loans in serious delinquency -- with owners behind on payments by 90 days or more -- also rose to 4.71% from 4.27% the previous year.