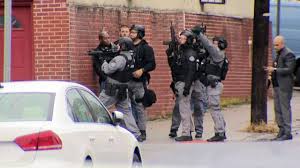 Reuters reports that six people have been killed, including the two shooters: (those killed include one police officer, three people who were inside the JC Kosher Supermarket when the shooting began, and both of the suspected shooters).

Jersey City Mayor Steven Fulop told a news conference that there were multiple people deceased inside the store, where suspects reportedly had holed up and exchanged gunfire with law enforcement in a standoff that lasted for hours.

The New York Times said the dead included a police officer, three victims who were in the store and two suspected gunmen.

Local media also reported the shooting unfolded at or near the JC Kosher Supermarket, though a city official told reporters there was no evidence the bloodshed was terror-related.