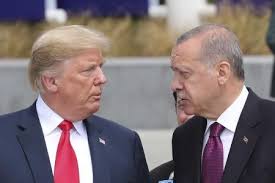 At the same time, Ankara has threatened to take back US military bases at Incirlik and Kurecik in Turkey, the Turkish Foreign Ministry has announced, saying it would "reevaluate" their status.

Sanctions legislation had been stalled by the Republican majority Senate, with the Rand Paul leading the charge against the bill, in order to give Trump more time to make a deal with Turkey over its controversial purchase of the Russian S-400 anti-air defense system.

The bipartisan bill sponsored by Republican Chairman Jim Risch and ranking Democrat Robert Menendez along with 16 other senators.

"I was willing to let the people talk," Risch told reporters last week, "Very shortly thereafter it changed, and it has gotten worse instead of better." Risch added of the next vote: "I suspect that bill's gonna pass 98-2 on the floor."