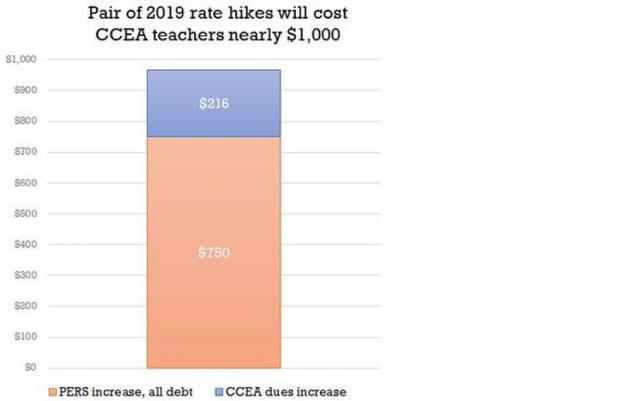 The first hike came earlier this year, when the state's Public Employees' Retirement System (PERS) announced an increase that will cost the average Nevada teacher an additional $750 annually.

The second increase came last month, when the CCEA voted to increase its annual dues to $846, up from $630.

Combined, these increases mean that most CCEA members are going to see nearly $1,000 more docked from their paychecks next year:

The PERS increase, like the several that preceded it, will provide no benefit whatsoever to the teachers forced to pay that added cost, which will be spent instead on the system's $14 billion deficit.

The CCEA, meanwhile, plans to spend the extra $2.2 million that it will take from teachers each year to lobby for a $1 billion tax hike.

The union claims that higher taxes and increased spending are the only way to improve Nevada's public schools but neglects to explain why the near tripling in spending that has already occurred since 1960 has failed to improve student performance.