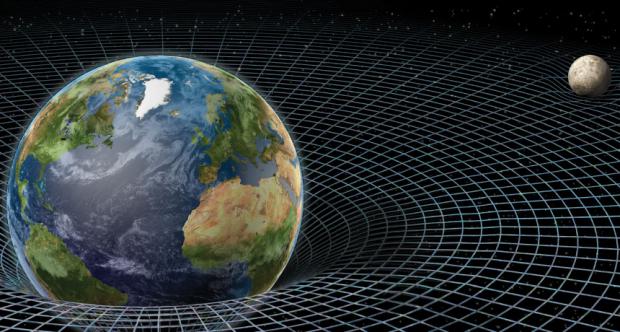 Einsteinian physics gives us our best understanding of the natural world, so why are we still hung up on Newton?

Isaac Newton is a physics icon, but he was wrong.

Sure, three hundred years ago, his discoveries about gravity and the laws governing motion revolutionised the world.

And yes, sure, those discoveries led to an incredibly useful mechanistic, deterministic view of the universe – in which one thing causes another.

It's the story we all still learn in school. But Einstein proved it was wrong a century ago.

What did Newton get wrong?

While Newton saw time and space as absolute, Einstein proved that time is relative – it depends on height and speed.

And space? Einstein said that space is curved by matter. So parallel lines will always cross, because space is never flat.

It's mind blowing. And it's not what we're taught in school.

Our kids still learn that time is absolute. And parallel lines never meet. In fact every bit of geometry you learn at school is approximate, because Newton's fundamental assumption about the fixed nature of space was false.

But it doesn't stop there.

When Einstein showed that light comes as little packets of energy (that we now call photons), he also predicted the physics of solar panels.

Louis de Broglie extended Einstein's hypothesis, and proposed that everything, whether a cricket ball, an electron or a photon of light, combines both 'bulletiness' (the momentum you feel when you catch a heavy ball) with 'waviness' (like the ripples on a pond).

Listen to David Blair talk about whether kids can understand relativity and quantum physics.

A consequence of all this is that our universe is far from mechanistic and deterministic. In fact, everything in the universe is statistical.

Reality is governed by strange but precise statistical rules. Reality is … fuzzy.

Einstein himself hated this conclusion and struggled to prove the absurdity of it. Famously saying: "God does not play dice."

But God and dice aside, physicists went on to prove that reality is indeed fuzzy.