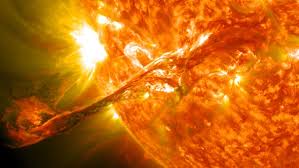 The sun is unusually quiet and docile, with no sunspots seen on its surface in 264 days — just four days short of setting a new record.

In 2008, no sunspots were observed for a total of 268 days and if the current period exceeds this it will become one of the deepest lulls of the modern era.

The sun typically follows an 11 year cycle of activity, and scientists have recently confirmed we are in the midst of a 'solar minimum'.

Solar minimums mark a period of reduced activity on the sun and sunspots and solar flares are less frequent.

At solar minimum, the sun's otherwise violent surface takes on a calmer and almost idyllic appearance but this faux calm can lead to magnetic storms which interfere with satellites, affect air travel and can even knock out power grids.

At the cycle's peak, solar maximum, the sun is continually peppered with spots, some as big as the planet Jupiter.

As the sun reached solar minimum, it increases the likelihood that activity levels will soon rebound with vigour.

A panel of experts from NASA and NOAA recently concluded that the current solar cycle is nearing its end, and the next one will begin when this streak ends.

1 Comments in Response to The sun has been eerily quiet for 264 days in a row - just 96 hours short of setting a new record...

From the article: "As the sun reached solar minimum, it increases the likelihood that activity levels will soon rebound with vigour." From Isaiah 30:26: "The moon will shine like the sun, and the sunlight will be seven times brighter, like the light of seven full days, when the LORD binds up the bruises of his people and heals the wounds he inflicted."