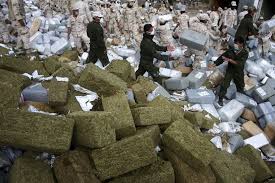 Instead, they inevitably say, "Judge us by our good intentions rather than by the actual consequences of our program."

Consider robberies, burglaries, thefts, and muggings. It is impossible to know how many of them are drug-war related but there is no doubt that many of them are. Yet, one never sees drug-war proponents apologizing or showing any remorse for the mayhem their program produces among victims of drug-war violence.

When drugs are made illegal, their prices inevitably go up. It's just a basic law of supply and demand. Making something illegal artificially limits the supply of it. Less supply means artificially higher prices. The more the government cracks down with strict enforcement, the higher the prices go.

Drug addicts and drug users who can no longer afford the drugs now have a choice. They can give up the drugs or they can do things to get the money to pay the artificially inflated prices for them. Giving up an addiction or even just the usage of drugs is not easy. Inevitably, many drug addicts and drug users resort to other means to get the money to pay for the drugs. They turn to robbery, muggings, burglaries, and thefts, some of which inevitably turn deadly.