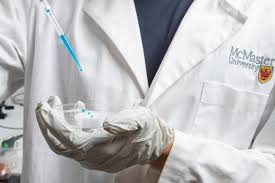 In environments ranging from hospitals to food preparation areas, it's vitally important to keep surfaces as bacteria-free as possible. A new material could definitely help, as it's claimed to repel even antibiotic-resistant "superbug" microbes.

Developed at Canada's McMaster University, the substance takes the form of a transparent plastic film that's reportedly flexible, durable and inexpensive to manufacture. The idea is that it could be shrink-wrapped onto frequently-touched items such as door handles, IV stands and railings – it could also be used in the packaging of food.

Drawing inspiration from the hydrophobic (water-repelling) microstructure of the lotus leaf, the film's surface is made up of microscopic wrinkles that keep both liquid droplets and bacteria from making a solid contact. As a result, when either of these land on the material, they simply bounce off.

In order to boost its repellant qualities, the material is additionally dipped in a liquid fluorine-based chemical.

Lab tests have shown that the film warded off almost all antibiotic-resistant MRSA and Pseudomonas bacteria that were applied to its surface. The university is now looking for industry partners who may be interested in commercializing the material.