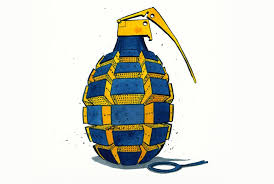 One article in particular, "All eyes on Malmo but not because of Trump" painted an idyllic picture of the lives of expats in Malmö. It spoke, among others, about a young American woman working in Malmö, Susanna Lewis, in the following way:

"As a woman, she is also used to being prepared and watchful as she walks alone in other places, yet she does not feel afraid in Malmö city centre or its outer suburbs".

The article went on to quote her: "I never have had that fear in Sweden. This is the safest place I've ever lived."

Now, however, even the BBC appears to have discovered that Sweden suffers from serious problems. In November, the BBC published an article headlined, "Sweden's 100 explosions this year: What's going on?"

"Swedish police are dealing with unprecedented levels of attacks, targeting city centre locations too. The bomb squad was called to deal with 97 explosions in the first nine months of this year," the BBC wrote. It even quoted Linda H. Straaf, head of intelligence at Sweden's National Operations Department, about the identity of the men behind the explosions and gang violence: