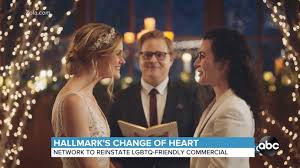 'The Crown Media team has been agonizing over this decision as we've seen the hurt it has unintentionally caused,' Perry said in a statement

'Said simply, they believe this was the wrong decision,' he added. 'We are truly sorry for the hurt and disappointment this has caused'

The hashtag #BoycottHallmark was trending at one point on Twitter, and celebrities like Ellen DeGeneres and William Shatner assailed the decision