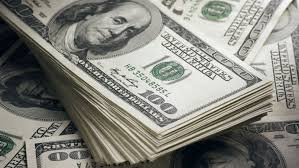 The reason that the US government can produce this false conclusion is that costs that are subtrahends from GDP are not included in the measure. Instead, many costs are counted not as subtractions from growth but as additions to growth. For example, the penalty interest on a person's credit card balance that results when a person falls behind his payments is counted as an increase in "financial services" and as an increase in Gross Domestic Product. The economic world is stood on its head.

It is aggregate demand that drives the economy. Payments made on a rise in interest rates on credit card balances from 19% to a 29% penalty rate reduce consumers' ability to contribute to aggregate demand by purchasing goods and the services of doctors, lawyers, plumbers, electricians, and carpenters. Contrary to logic, the fee is magically counted in the "financial services" category as a contributor to GDP growth. The extortion of a fee that reduces aggregate demand lowers GDP, but builds paper wealth in the financial services sector.

GDP growth is also artificially inflated by counting as GDP abstract concepts that do not produce income streams. For example, for homeowners the US Department of Commerce estimates the rental values of owner-occupied housing, that is, the amount owners would be paying if they rented instead of owned their homes, and counts this imputed rent as GDP.

We're All in This Together: A Case for Not Giving Up on the American Dream