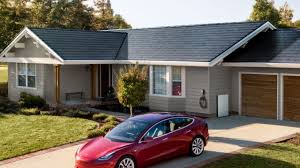 This time, it is to hide the company's "Solar Test House", which is where the company will be testing its Solar Roof Tiles.

The company is going to be using "canopy covers" over its solar test structures, according to building permits reviewed by CNBC. Tesla has been taking orders for its Version 3 of its Solar Roof Tiles since October, with Musk claiming at the time that some installations were already taking place.

The goal of the tents is to prevent "prying eyes" on the company's test structures. We're sure this includes the kinds of people that could realize that the Solar Roof tiles are materially different than Musk has led the public to believe, if that was the case, and could disseminate such information through Twitter. CNBC speculates the tents could also be used to avoid rain delays.

Meanwhile, it has now been more than three years since October 2016, when Musk first "revealed" the tiles in an event that many skeptics say was purely for show and to move Tesla's bailout merger of SolarCity along. A solar panel expert recently debunked Tesla's 2016 presentation in a podcast and explained why he used it as the basis for forming his skeptical opinion on the company.

Musk has yet to disclose how many people have paid $100 to pre-order the Solarglass Roof, despite touting the company's pre-order numbers for its Cybertruck. Is it possible that both products still don't exist, we wonder? Musk also hasn't shared when and where the rooftops would be available for installation.