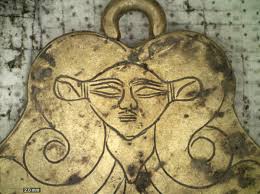 Archaeologists discovered the tombs that once had dome-shaped roofs

Archaeologists have unearthed two monumental Bronze Age tombs in the south of Greece, littered with flakes of gold leaf that once papered the walls.

The tombs, which date back around 3,500 years, were discovered near the Mycenaean-era palace of Pylos in Greece's Peloponnese region - which featured in Homer's Odyssey.

They were made in the Tholos style, characterised by massive domed underground constructions like beehives. These types of tombs were generally reserved for Mycenaean royalty.