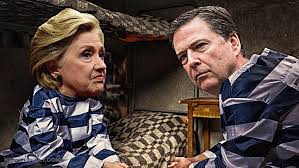 If such an operation were to occur during wartime, one would call it "treason." If in peacetime, it's "sedition" at a minimum.

Come to think of it, it's still a crime to attempt an overthrow — a coup, if you will — of a duly-elected president. That's what the "Spygate" scandal is really all about when you boil it down to the bare essentials.

The Obama regime, aided by deep state operatives in the intelligence community and federal law enforcement, all of whom relied on their propagandists in the mainstream media to help them perpetuate the act, clearly and blatantly engaged in an attempt to prevent Donald Trump from becoming president, as well as undermine him after he won. (Related: Democrat House members prepare to strap political NOOSES around their own necks in impeachment fiasco based entirely on fabricated thought crimes.)

There has been enough reporting from legitimate media, including us, to substantiate the allegation. There has been plenty of evidence of said coup attempt uncovered by Republicans in Congress to corroborate the claim.

And yet, not a single solitary individual involved in this obvious act of treason (remember, we are at war in Afghanistan and in parts of the Middle East and under a 2001 Authorization for the Use of Military Force — the modern-day equivalent of a declaration of war) has been held to account.

We must have accountability if America is to survive

Yes, some people have been fired. Comey, McCabe, and Strzok have all lost their jobs. Ohr, the Justice Department's former No. 4 official, has been demoted. Page was allowed to resign, and Baker is no longer employed as a top FBI lawyer.

But losing a job is one thing. These people deserve to lose their freedom. They must, in fact, if we are to preserve our republic for our posterity and hand down to our children a country that still values the rule of law.