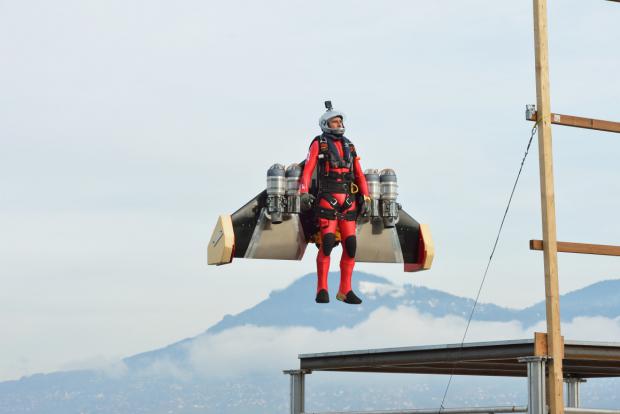 The inability to take off from the ground has always been the weakness of Rossy's stunning back-mounted personal flight machine. Launching from altitude was a pain, but once he was in the air he looked absolutely unstoppable, soaring, diving and climbing like a bird with the advantage of wing lift to boost flight efficiency.

Now, with four new, more powerful Jetcat P550 turbine engines on the wing, he's now got enough vertical lift to fly straight upwards at up to 180 km/h (112 mph) – see the video below – and has been working with a Swiss team to develop an autonomous, self-balancing vertical takeoff system.

And today, he's released more footage off the tether, taking off and hovering over a lake before coming back in to land. We must've watched this video a dozen times. It just looks so easy and relaxed. Rossy's arms are completely free, he uses nothing but finger controls built into his gloves, and the jet wing happily self-balances. From there he seems to have the ability to move around slowly in hover mode, and land gently on his feet.