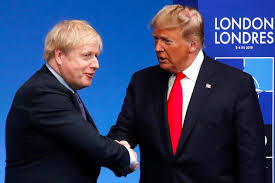 First and foremost, the British prime minister has made it abundantly clear that his first priority will be to break the Brexit deadlock that has effectively paralysed British politics, and the country's ability to make its voice heard on the international stage, at the earliest possible opportunity, thus opening the way for a trade deal with Washington.

As a start, Mr Johnson has committed his new government to fulfil its election pledge to complete Britain's withdrawal from the European Union by the end of January. Furthermore, he will enshrine in law his promise that the complicated trade negotiations that are due to take place next year to finalise Britain's future trading relationship with the EU bloc will be completed by the end of 2020.

Critics of Mr Johnson's ambitious programme to free Britain from the EU's shackles and negotiate a new network of global trade deals have argued that completing the process of establishing a new trading framework with the EU will take much longer than a year, especially in view of the EU's notoriously slow approach to completing such transactions. The critics point out, for example, that the Canada-EU trade deal took seven years to negotiate and was 22 years in the making.