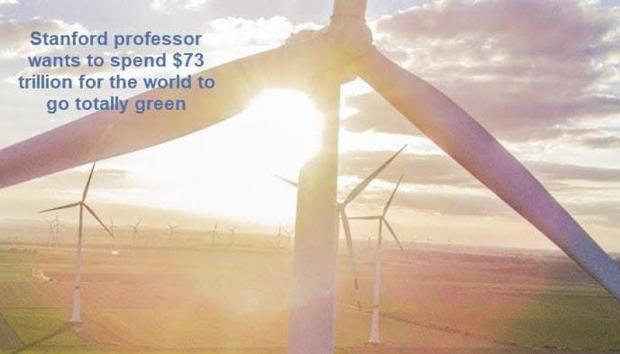 Stanford University professor Mark Z. Jacobson wants to spend $73 trillion for the world to go totally green. Not only that, supposedly it will pay for itself in 7 years.

Jacobson claims Going 100% Green Will Pay For Itself in Seven Years.

It would cost $73 trillion to revamp power grids, transportation, manufacturing and other systems to run on wind, solar and hydro power, including enough storage capacity to keep the lights on overnight, Mark Jacobson said in a study published Friday in the journal One Earth. But that would be offset by annual savings of almost $11 trillion, the report found.

"There's really no downside to making this transition," said Jacobson, who wrote the study with several other researchers. "Most people are afraid it will be too expensive. Hopefully this will allay some of those fears."