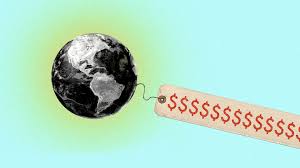 It's rare that I read something on the Washington Post that I don't find highly biased, even repugnant. But with their recent article on the Afghanistan Papers, they truly knocked the ball out of the park.

The facts they shared should have every American protesting in the streets. Trillions of dollars have been spent on a war that the Pentagon knew was unwinnable all along. More than 2300 American soldiers died there and more than 20,000 have been injured. More than 150,000 Afghanis were killed, many of them civilians, including women and children.

And they lied to us constantly.

Congress just proved that the truth doesn't matter, though. A mere 22 hours after the release of this document, the new National Defense Authorization Act that breezed through the House and Senate was signed by the President. That bill authorized $738 billion in military spending for 2020, actually increasing the budget by $22 billion over previous years.

So, how is your representation in Washington, DC working out for you?

What are the Afghanistan Papers?

The Afghanistan Papers are a brilliant piece of investigative journalism published by the Washington Post and the article is very much worth your time to read. I know, I know – WaPo. But believe me when I tell you this is something all Americans need to see.

This was an article that took three years of legal battles to bring to light. WaPo acquired the documents using the Freedom of Information Act and got more than 2000 pages of insider interviews with "people who played a direct role in the war, from generals and diplomats to aid workers and Afghan officials." These documents were originally part of a federal investigation into the "root failures" of the longest conflict in US history – more than 18 years now.

Three presidents, George W. Bush, Barack Obama, and Donald Trump, have been involved in this ongoing war. It turns out that officials knew the entire time this war was "unwinnable" yet they kept throwing American lives and American money at it.

Here's an excerpt from WaPo's report. Anything that is italicized is taken verbatim from the papers themselves – you can click on them to read the documents.

In the interviews, more than 400 insiders offered unrestrained criticism of what went wrong in Afghanistan and how the United States became mired in nearly two decades of warfare.

With a bluntness rarely expressed in public, the interviews lay bare pent-up complaints, frustrations and confessions, along with second-guessing and backbiting.

"We were devoid of a fundamental understanding of Afghanistan — we didn't know what we were doing," Douglas Lute, a three-star Army general who served as the White House's Afghan war czar during the Bush and Obama administrations, told government interviewers in 2015. He added: "What are we trying to do here? We didn't have the foggiest notion of what we were undertaking."

"If the American people knew the magnitude of this dysfunction . . . 2,400 lives lost," Lute added, blaming the deaths of U.S. military personnel on bureaucratic breakdowns among Congress, the Pentagon and the State Department. "Who will say this was in vain?" (source)

The important thing to note about these interviews is that the interviewees never expected their words to become public. They weren't "blowing the whistle." They were answering questions for a federal investigation. So they didn't hold back. These aren't "soundbites." It's what the real witnesses are saying.